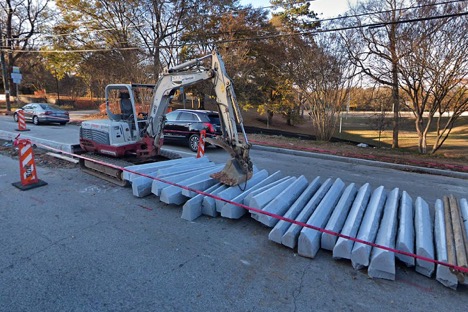 $2.7M in grants is expected to help pay for pedestrian and bike infrastructure.

From downtown to Vine City and beyond, a harrowing on-street route for anyone not in a vehicle is changing—and now it’s better capitalized.

The Atlanta City Council on Tuesday voted in favor of legislation that will send $2.67 million more toward the Martin Luther King Jr. Drive Innovation Corridor Project.

The money is coming in the form of grants from the U.S. Department of Transportation and is expected to help revitalize more than seven miles of MLK Drive, from Northside Drive to Fulton Industrial Boulevard, with better pedestrian and bike infrastructure.

Paving near the Beltline’s Westside Trail and protected bike lane installation on MLK, just west of Mercedes-Benz Stadium, is underway now, in addition to other work.

The new funding accounts for just under 10 percent of what’s anticipated to be a $27 million project.

Per city officials, the project’s completion is scheduled for summer 2020.

When finished, the project is expected to create new multi-use trails and a linear park along the road, too.

It would also bring landscaped medians, pedestrian crossing islands, and repaired sidewalks, in addition to the two-way cycle track.

The project is also funded in part by a $10 million TIGER Grant secured by the City of Atlanta in 2016.