After years of waiting, Beltline’s Eastside Trail will soon be illuminated at night 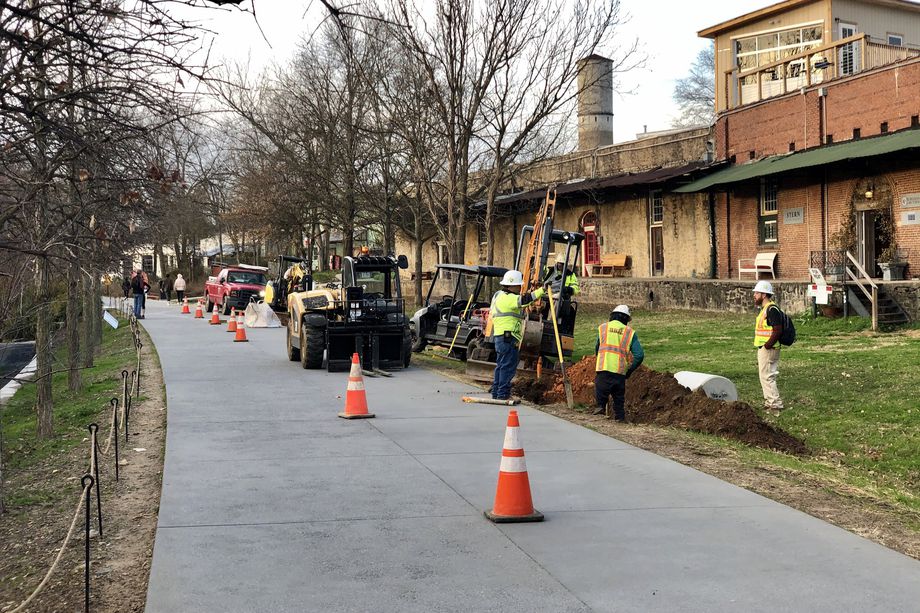 Meanwhile, an important Southside Trail leg between job centers is set to launch construction next week.

More than seven years after the first leg of the Atlanta Beltline’s Eastside Trail opened to the public, the popular paved path is finally, officially getting lights, as any visitor can plainly see now.

Less apparent is the years-long struggle—and one sputtered fundraising campaign—it’s taken to reach this point.

Beltline officials have shared images of the bulky foundations for the light fixtures being installed every 90 feet between Monroe Drive, in Midtown, and Irwin Street, in Old Fourth Ward and Inman Park.

Crews can now be spotted digging with backhoes trenches for conduit and wiring, and in coming weeks, the most bustling segment of the multi-use path project will be illuminated, project leaders say.

In other Beltline news, officials recently announced that construction of the Southside Trailis slated to commence next week, on January 22.

For the first time, the Beltline will be building out three different pieces of the planned 22-mile loop simultaneously.

This first phase—now called Southside Trail-West—will run “about a mile from the southern terminus (near Capitol View Apartments) of the Westside Trail to Pittsburgh Yards on University Avenue,” said Beltline CEO Clyde Higgs in a blog post today.

Higgs said this portion was picked to be constructed first because it links four emerging jobs hubs—Pittsburgh Yards, Murphy Crossing, Lee + White, and The MET.

Project officials are still working to design and fund the rest of the Southside Trail, which is ultimately expected to span about four miles between the Westside and Eastside trails.

“Our goal is to be shovel-ready [for the broader Southside Trail project] by the end of 2020,” Higgs wrote.

Higgs also noted the Southside Trail project provides another opportunity to embrace the affordability and economic sustainability goals laid out by Beltline visionary Ryan Gravel during the project’s infancy.

“We cannot have affordable housing in a city or a neighborhood without also taking into consideration employment and mobility opportunities in that area,” Higgs wrote. “On the southside, we have a tremendous opportunity to work with strategic partners and the community to cultivate a community-centric approach to economic development that is grounded in workforce development and job creation.”